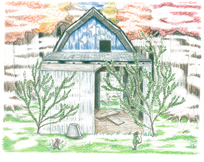 As previously mentioned, the barn itself is a character in the stories of Remy and Louis.  As Josh and I began discussing the characters and their respective personalities, he tutored me on how environment is often a character itself.  So, knowing that a barn would be a setting in the stories, I began imagining how it looked, and not long after had a fateful happening.

I went to visit a good friend.  During our time together, she shared a story about a barn her father and mother had built many years prior. She described the colors of the barn and told me why those colors were chosen, as well as why the barn had three stars on its face. The more memories she shared, the more intrigued I became, especially when she explained that the barn was still standing and that I would pass it on my drive home. Excitement to see the barn grew as I drove.

Finally, I spotted the barn off in the distance and my eyes teared up. As I approached the barn, the first thing I noticed were the stars she had mentioned. Even though the barn’s colors were faded, it was obvious that at one time it had been painted red, white, and blue. I got out of the car and walked to the barn through the undisturbed tall grass surrounding it. It appeared it had not been visited in quite some time. I studied each of its sides while taking pictures. It was the perfect home for Remy and Louis, I thought.

When I shared the photos with Josh, he was excited to draw this “character” and capture its unique characteristics. 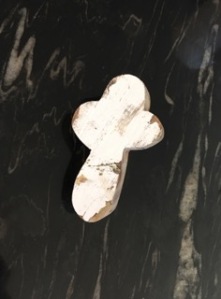 Months later, my friend’s older brother wrote me a letter sharing the barn’s history and his fond memories of it. He expressed the family’s delight that I had featured the barn in the book and even took the time to fashion a cross for me  from one of the barn’s fallen wood slats.

I am happy to know the family is pleased to have the barn serve as a home for the other characters in our book.